A Case Report on Osteochondromas or Osteocartilaginous Exostoses: Common Benign Tumors of the Bones

The majority of osteochondroma is symptomless and is found incidentally. The tumors take the form of cartilage-capped bony projections or outgrowth on the surface of bones (exostoses). It is characterized as a type of overgrowth that can occur in any bone where cartilage forms bone. These tumors most commonly affect long bones in the leg, pelvis, or scapula (shoulder blade). Development of osteochondroma takes place during skeletal growth between the ages of 13 and 15 and ceases when the growth plate fuses at puberty. Osteochondromas occur in 3% of the general population and represent 35% of all benign tumors and 8% of all bone tumors. The risk of malignant transformation takes place in 1–5% of individuals. Majority of these tumors are solitary non-hereditary lesions and approximately 15% of osteochondromas occur as hereditary multiple osteochondromas (HMOs). Osteochondroma do not result from injury and the exact cause remains unknown. The treatment choice for osteochondroma is surgical removal of solitary lesion or partial excision of the outgrowth, when symptoms cause motion limitations or nerve and blood vessel impingements. 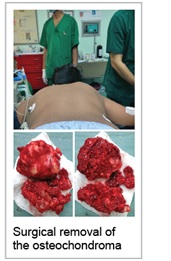 After proper counseling with patient’s attendant about the swelling and its treatment outcome, patient underwent total excision of the right scapular mass under General Anesthesia and tissue was sent for histopathology.

There was a lobulated/ cauliflower like bony mass of about size of 5 inches x 4 inches x 3 inches with cartilage cap covered by fibrous perichondrium and continuous with the periosteum of the underlying right scapula, extended from posterior surface of medial angle, part of supraspinatous fossa, half of scapular spine and part of infraspinatous fossa which was excised and sent for histopathological examination. His post-operative period was uneventful.