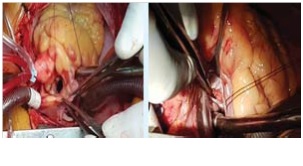 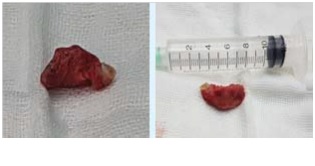 Myxomas, the most commoncardiac neoplasms, are usually detected in the left atrium. Left ventricular myxom as account for only a small percentage of cardiac myxomas. Surgical excision is the treatment of choice and complete removal is mandatory to prevent late recurrence. These tumours are resected through left ventriculotomy or via a transmitral or transaortic approach. A 34 year old lady presented with exertional chest pain for 6 months and palpitation for previous 15 days. She had also a history of syncopal attack 3 months back. Echocardiogram showed a mass (20 mm x 18 mm) in the left ventricle, the stalk of which was attached to the interventricular septum. After median sternotomy, under general anaesthesia cardiopulmonary bypass was established. Following right atriotomy and incision on interatrial septum, the mass was approached transmitrallyand excised along with its stalk. Her postoperative period remained uneventful. Postoperative echocardiogram was satisfactory with presence of no residual mass in the left ventricle. Histopathological report revealed presence of 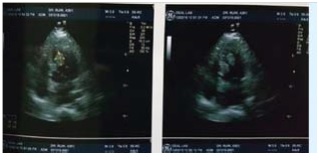 myxoid stroma, stellate cells and inflammatory cells which were compatible with myxoma. She was discharged on the 7th post-operative day.There was a follow up recommendation to do an echocardiogram quarterly for 1 year, then 6 monthly for next 3 years and then yearly This was a very rare case of myxoma originating from left ventricle with a very short stalk which was attached to the interventricular septum. The myxoma was approached transmitrally to avoid any injury to the septum and left ventricle and was  successfully removed.