A 6 months old female baby with her parents came to Radiology & Imaging department of United Hospital for CT Scan of chest referred from Dhaka Shishu Hospital. Her birth history revealed that she was born prematurely at 32 weeks of pregnancy with 1.75 kg body weight through vaginal delivery which was precipitated by premature ruptured membrane & early labour pain.After delivery her crying was delayed (10-15 minutes) & feeble. The baby was initially managed in a district hospital. The baby used to suffer from cough with audible breathing noise during breast feeding. Her feeding was also poor. The baby was of 3 kg weight at 2 month and of 4 kg weight at 5 months of age but developmental milestones like neck holding and sitting were delayed. At the end of 5 months the baby developed cough, respiratory distress and pneumonia. In the process of treatment at Dhaka Shishu Hospital was diagnosed as left sided collapse and consolidation of lungs in chest X-ray with large VSD(ventricular septal defect) and large ASD (atrial septal defect) with severe pulmonaryarterial hypertension in Echo. CT Scan of Chest done in United Hospital Radiology & Imaging Department showed:

Finally it was diagnosed as a case of unilateral type-II pulmonary agenesis with multiple intra-cardiac shunt and vascular anomalies. After another week at the age 6 months the baby expired.Pulmonary agenesis is a rare congenital malformation with a frequency of 1/10,000 to 1/15,000 autopsies. Unilateral pulmonary agenesis is compatible with life; though risk of fatality increases with association of other anomalies cardiac, gastrointestinal and skeletalorigin. It is very much needed to be diagnosed early with immediate multidisciplinary intervention to enhance the viability of the child. Diagnosis can be made in early antenatal life with obstetrical USG of the mother; fetal MRI can assist in confirmation of the diagnosis. 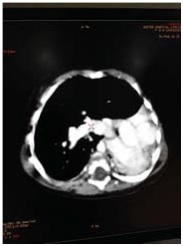